Thomas Holesgrove is an Australian actor who played various roles in Farscape, often appearing as an alien behind heavy make-up and/or prosthetics. Thomas graduated from the Australian National University, and has also performed as a classical stage actor, burlesque clown and a few Shakespeare roles as well. 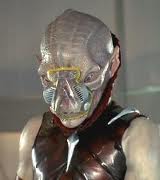 ... as Moordil the bartender in "Suns and Lovers"

Thomas as Vek the tracker/bounty hunter.
Add a photo to this gallery

Retrieved from "https://farscape.fandom.com/wiki/Thomas_Holesgrove?oldid=26479"
Community content is available under CC-BY-SA unless otherwise noted.